New developments such as the Internet of Things, natural language processing and even the ability to detect a user's emotional state are changing how we interact with smart technologies, but is research and design guidance keeping pace with the new advances? In particular, are the needs of all users being considered during the design and development of these systems?

The objective of this tutorial is to introduce and explore how interaction science, design theory and user data need to be considered when designing new technologies. Many standard models and assumptions of user behaviour, performance and capabilities are based on young adult populations and consequently do not represent wider, more heterogeneous user groups, such as older adults and people with disabilities.

This tutorial will illustrate the difficulties that designers and developers may face through lessons from past design failures and how they can be used to improve the designs of the future. It will also address a number of more philosophical issues, such as privacy matters and allowing the user to remain in control of the interaction.

This tutorial will cover the basics and introduce more advanced aspects of interaction science. user-centred design and Universal Access. We will explore how they are fundamentally related and also their application in real-world situations.

It is widely accepted in principle that both user-centred design and Universal Access are essential for the development of products that are both usable and accessible by the widest possible range of users. However, in all design processes, it is necessary that quantifiable and verifiable measures of success are established. Fundamentally, we need to know whether a design solution actually works how it is intended to. In the case of Universal Access for human-computer interaction, such measures are usually derived from interaction metrics.

There are standard measures of user performance, but these have often been validated and calibrated against very homogeneous users populations. These models can often be applied to wider users populations, but need careful handling when doing so.

In this tutorial, we will examine the role of a number of these models and metrics, and how they have been adapted successfully to other population sets, including older adults and people with severe motor impairments.

The case studies will include the design and evaluation of a wide range of both hardware and software, including kiosks, robots, websites and the next generation of television and broadcast media.

This tutorial will also look beyond the mechanics of Universal Access to consider the underlying questions of what we are trying to accomplish when designing a system to meet the needs, wants and aspirations of the users. How do we ensure that the users understand what the system is doing and remain in control?

The benefits for participants will include an understanding of how both software and hardware considerations can influence the design of emerging technologies and their successful uptake.

The tutorial is designed for anyone with an interest in Universal Access and accessibility, from academic researchers to industrial practitioners and policy makes interested in the development of genuinely accessible solutions. 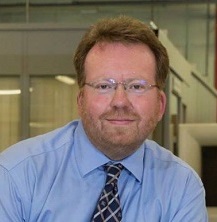 After 12 years at Cambridge, he moved to the US and joined the Accessibility Research Group at the IBM TJ Watson Research Center before moving to Boston and working at ITA Software (now part of Google) as a Usability Lead designing interfaces for Air Canada.

Simeon also has an extensive history of consultancy, with clients including The Post Office (Royal Mail), the US Social Security Administration, the UK Department of Trade and Industry, the Danish Broadcasting Corporation (Danske Radio) and Lockheed Martin. His research interests include inclusive design, user-centred design, AI, HCI, robotics, novel computer architectures and machine-learning. He is the author of numerous books, including "Countering Design Exclusion: An introduction to inclusive design" and "Designing for Accessibility: A business guide to countering design exclusion."